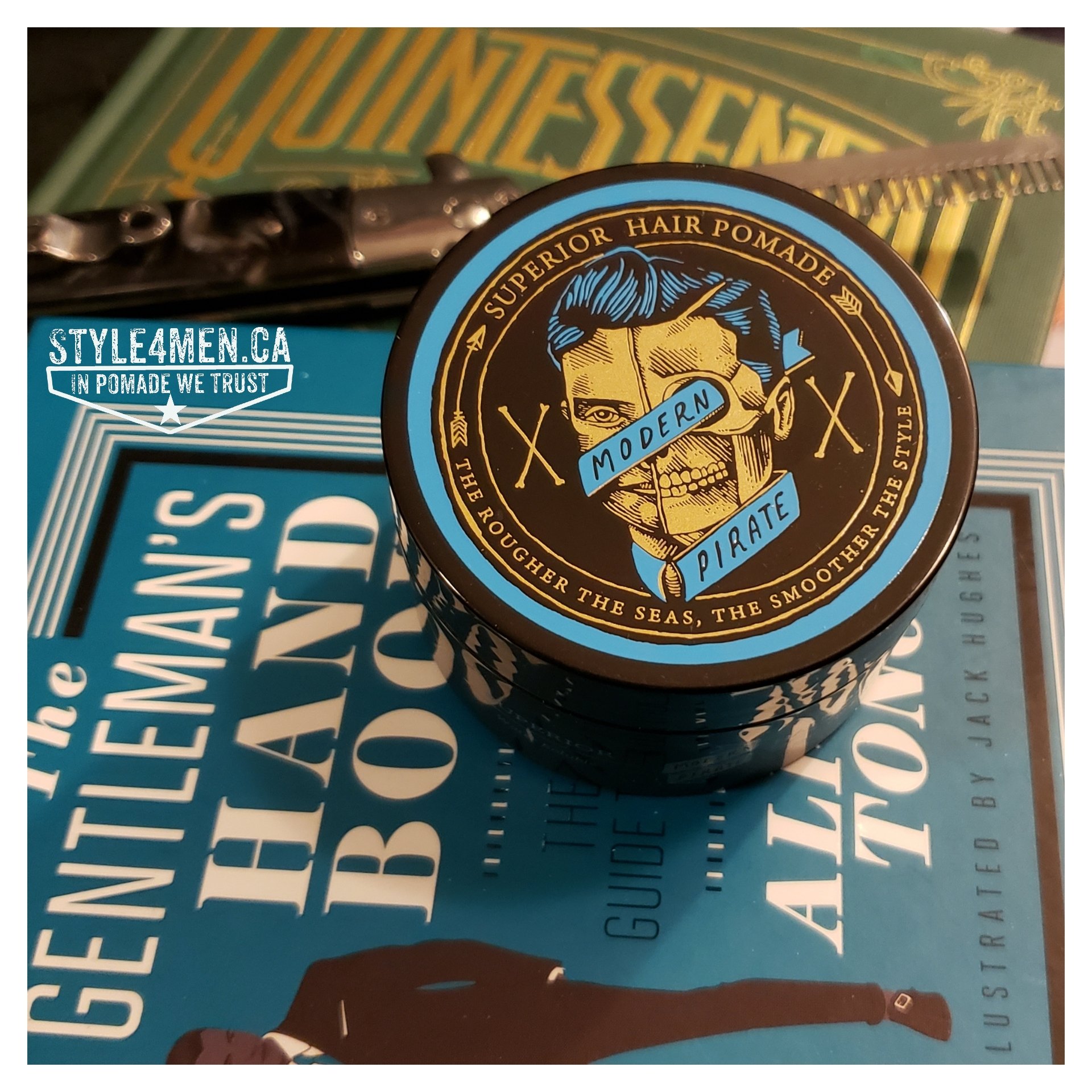 Working with the Modern Pirate range this week.  This Australian pomade brand has done a fabulous job of putting their product forward with a very original/unique labeling as you might have seen in the unboxing.

A word on the jar before we get into it. Clearly extra efforts have been made in the production of these jars as the art and lettering is all directly printed on the said jar as opposed to being applied to a label.  Minor detail, but this adds to the refinement of the package.  As you can see the jar is black and I never tire of that.  It creates an element of mystery to the whole thing which one would expect from a modern pirate or ancient one. 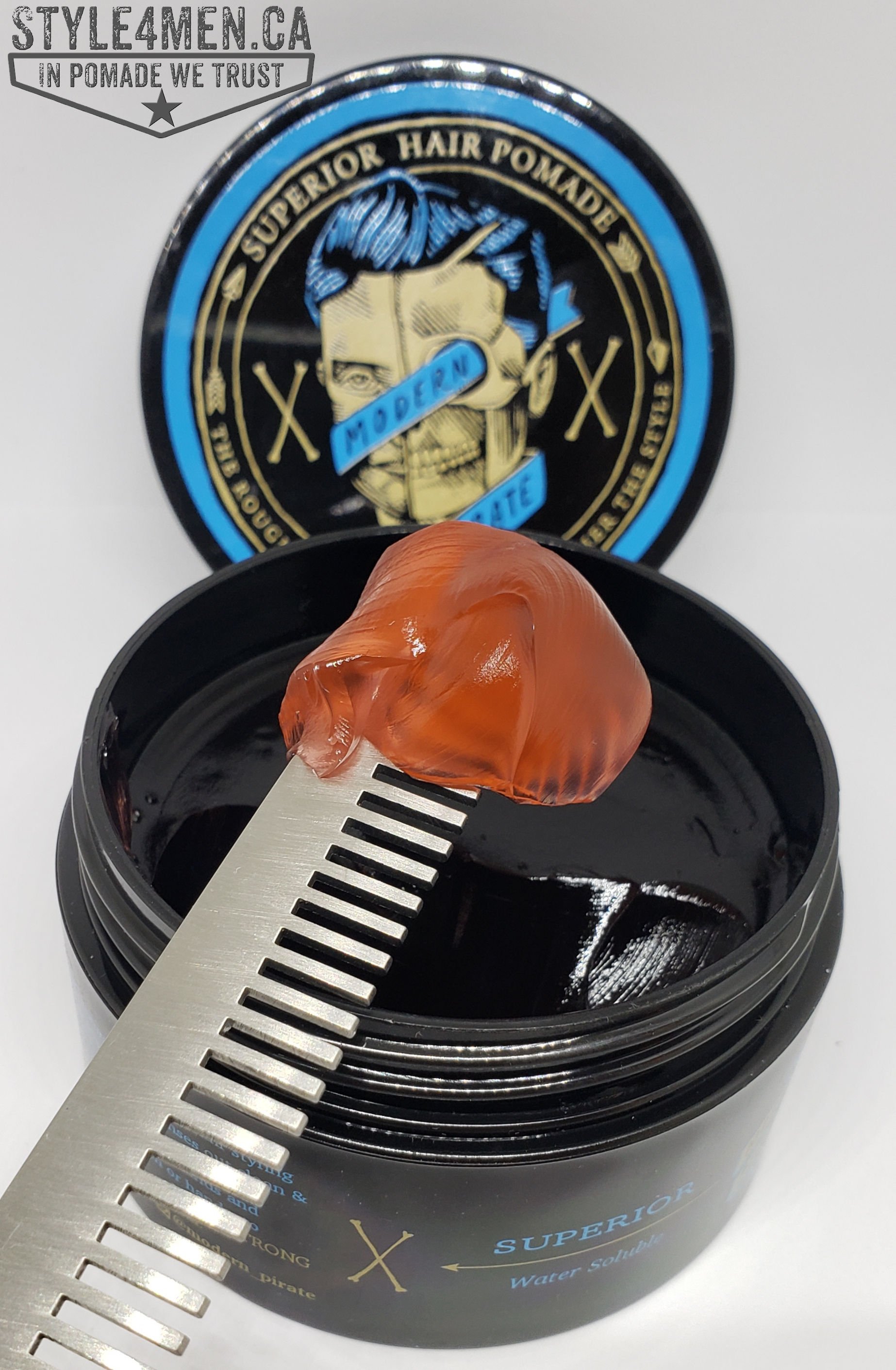 Shout out to Cierra at Classic Barber Products for making this review possible.

The first puck I am trying is the pomade is none other than their Superior Hair Pomade (Quelle Surprise?).  Upon opening the jar I was presented with that reassuring firm jelly like texture that is typical of water pomades.

The scent is…. My nose is acting up a bit these day and I am having a harder time narrowing down some scents.  This is clearly a sweet aroma, but I am debating between coconut, almond and maybe cherry.  What is certain is that it is mild  in intensity.  Always a good thing as you might not want your pomade to compete with your cologne.  I will say that it will be a subtle surprise for that special someone getting close to your hair.  I find the combination of scents to be tasteful, pleasant and certainly worthy of a gentleman. 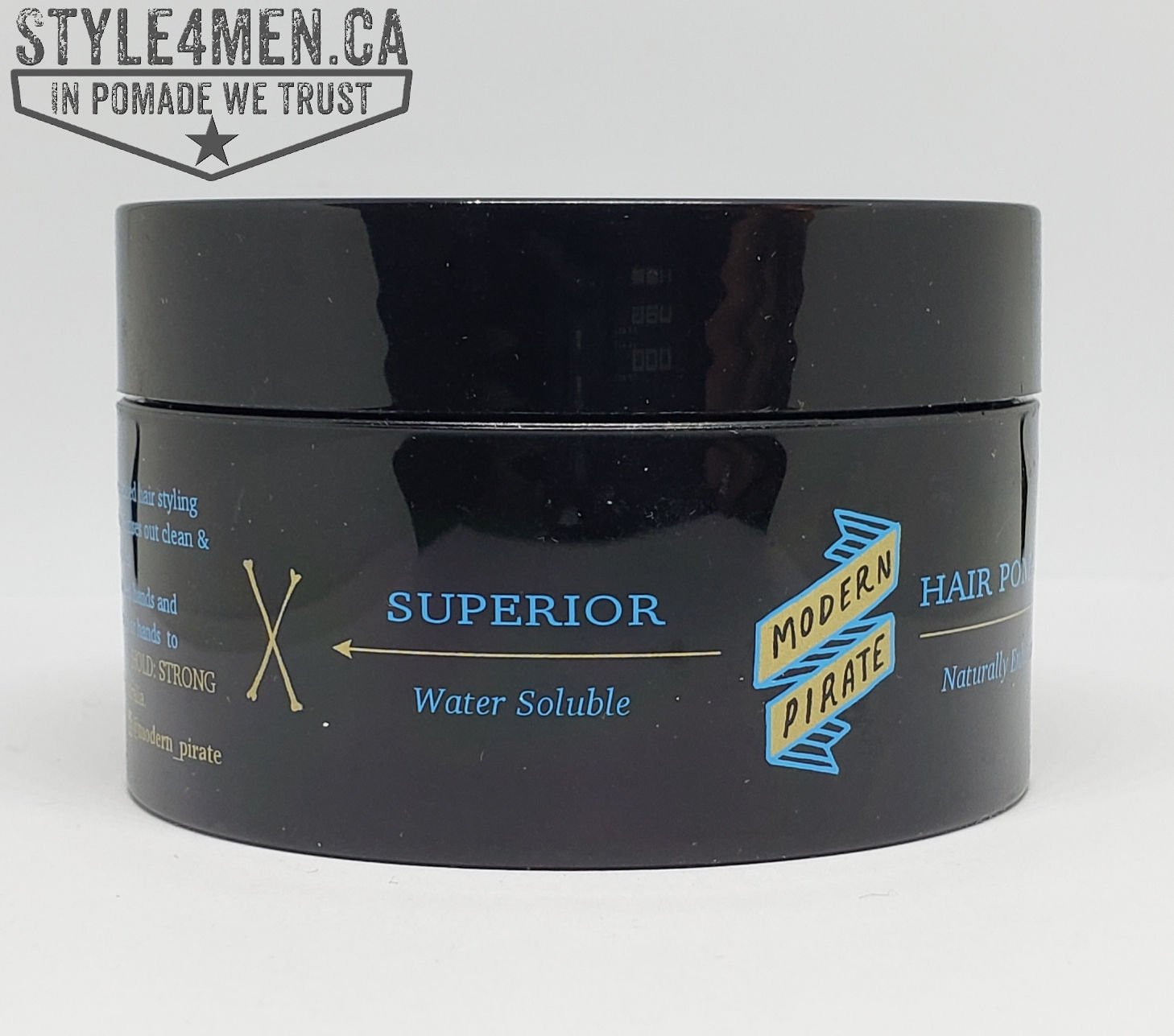 The pomade is a very light copper shade. Read that as it will have no colouring impact whatsoever on your hair.  The texture is nice and thick and is no trouble to scoop out.   It relaxed easily in my palms and the application was just as simple.   Left to right, back to front, right to left and finally front to back.  As I was applying, I had a preoccupation as the pomade almost felt too soft and I feared that it would not hold. That fear was very quickly dismissed as I started combing my mope.  No trouble shaping things into a pomp and it stayed!  Aaaaah!  The real test was some 20 minutes later.  Did everything survive?  It did.  I was pleased to see in my reflection that the pomp was rocking and a nice healthy shine had joined the party. 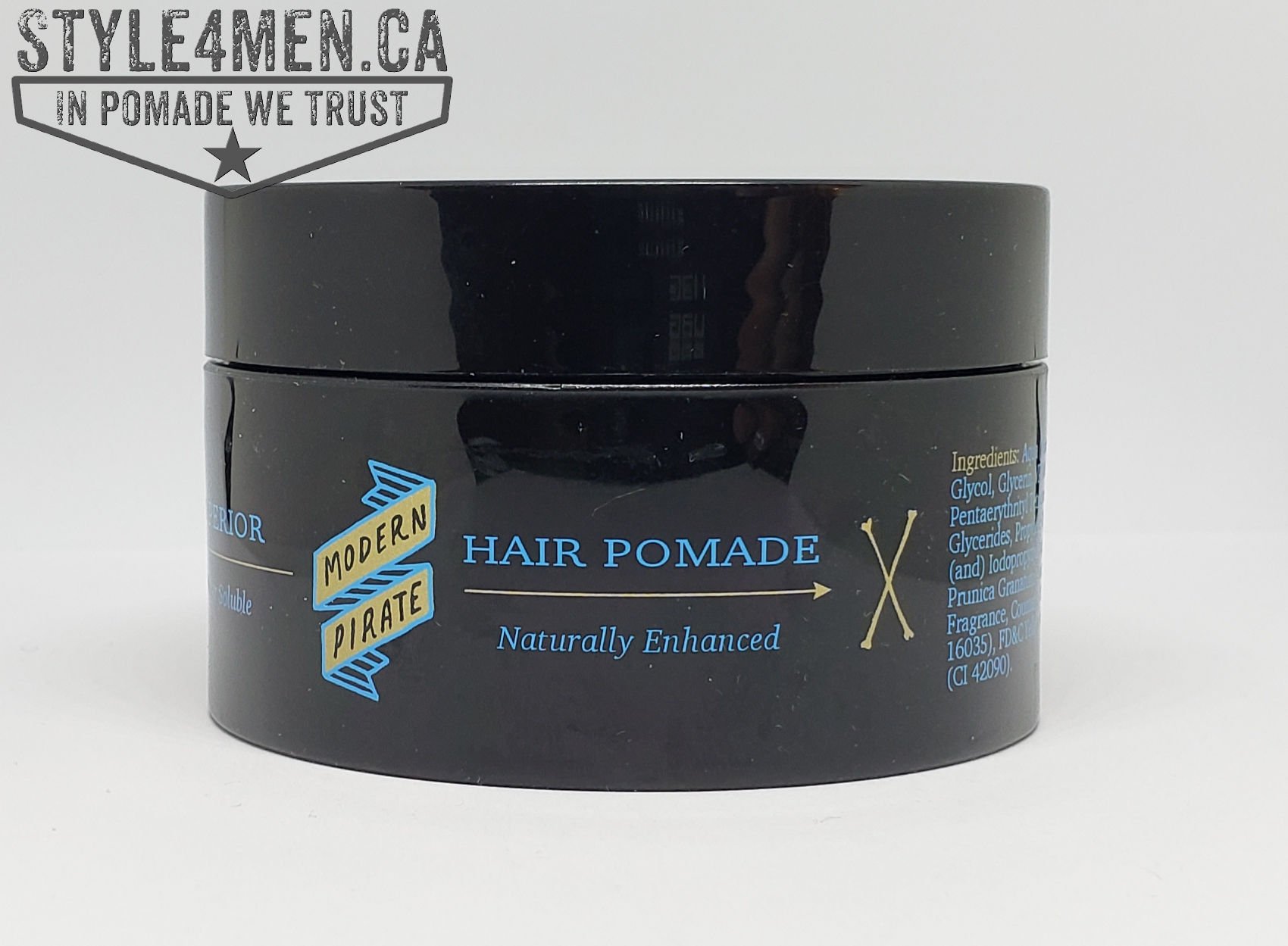 That slight preoccupation of the pomade possibly being too soft is something I am encountering more frequently than at the beginning of the Style4men.ca adventure. It took me a while to narrow this down, but the light eventually went on.  When I started getting interested in pomades a number of years ago, many of the jars I was able to buy had made a very long trip top get to Canada and had also probably spent a fair bit of time in a warehouse or Barbershop before finally being matched up to a buyer. The pomades I am working with these day are in many cases coming directly from the brand owners and are as fresh as can be.  As a side note, most hair products have a 3 years shelf life . The simple reality is that pomades are now in very high demand (for obvious reasons) and are spending next to no time traveling from their makers to their new owners.  Apologies for taking off on that tangent! 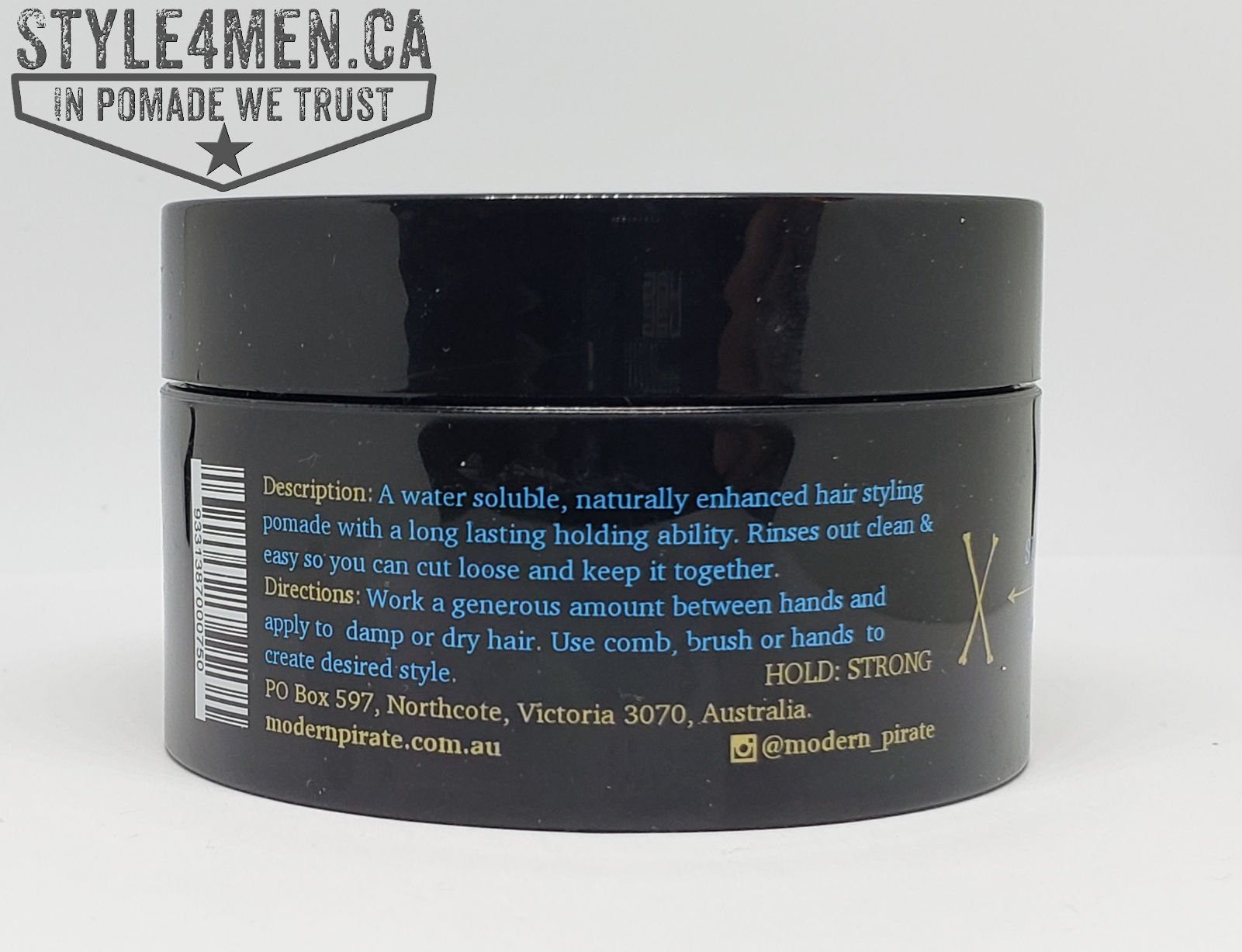 How is the Modern Pirate pomade an hour after application?  Up front pomade is not comparable to a gel which will typically dry to a crunchy stage.  This pomade had a firm feel, but was clearly workable (if need be).  I am typing this review up some 8 hours after my morning application and things are essentially as I set them at styling time.  Read that as this stuff is going to work with you ALL DAY!

Here is the rating on a scale of 1 to 5 where 5 is a perfect score and/or level of shine: 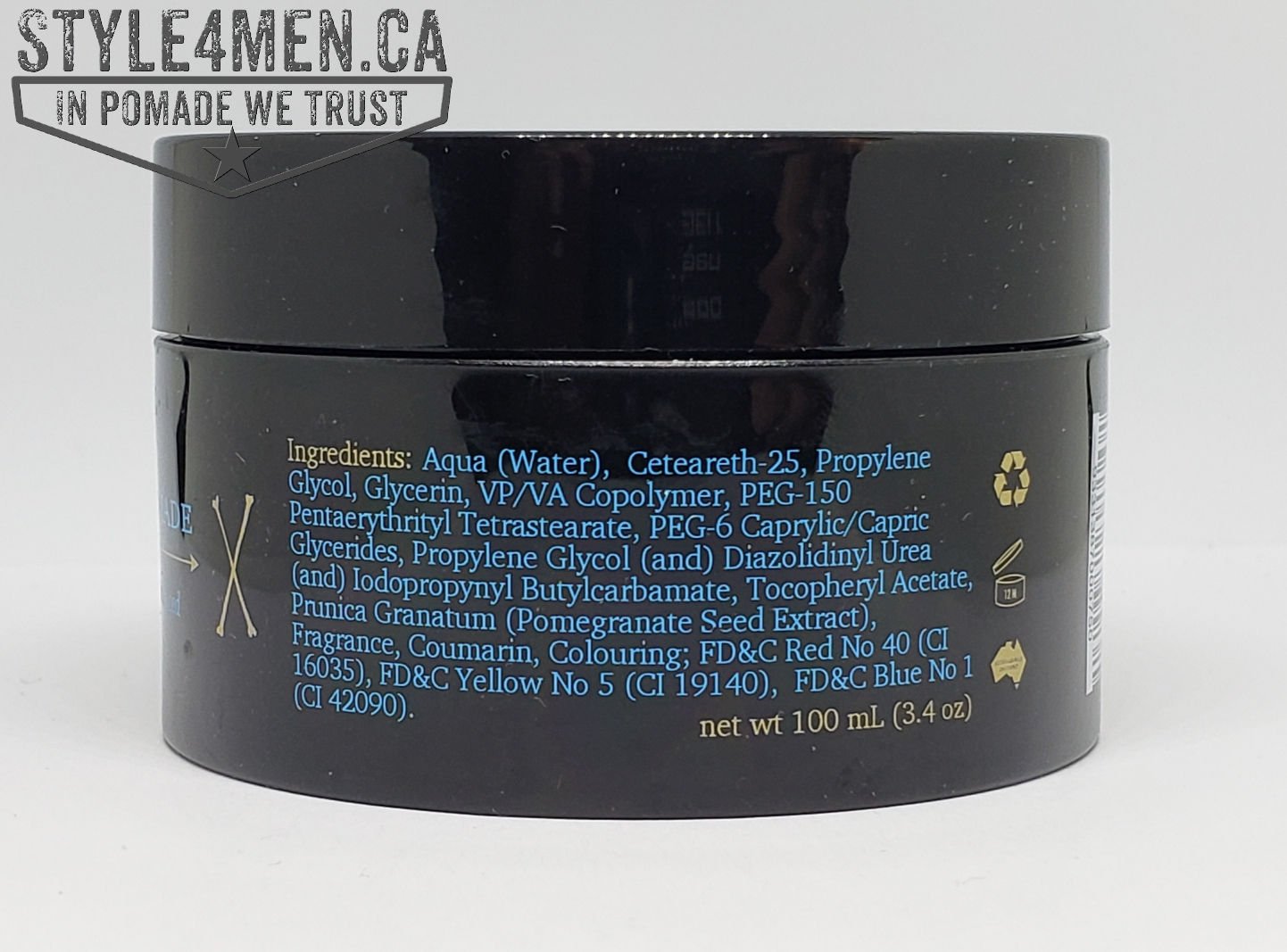 In so many words, the guys at Modern Pirate have nailed it!  Solid and original presentation along with a top performing product.  Well done Modern Pirate.  We give it all 5 stars.

PS – I am enjoying this pomade so much that I am delaying trying the other 3 pucks from Modern Pirate.