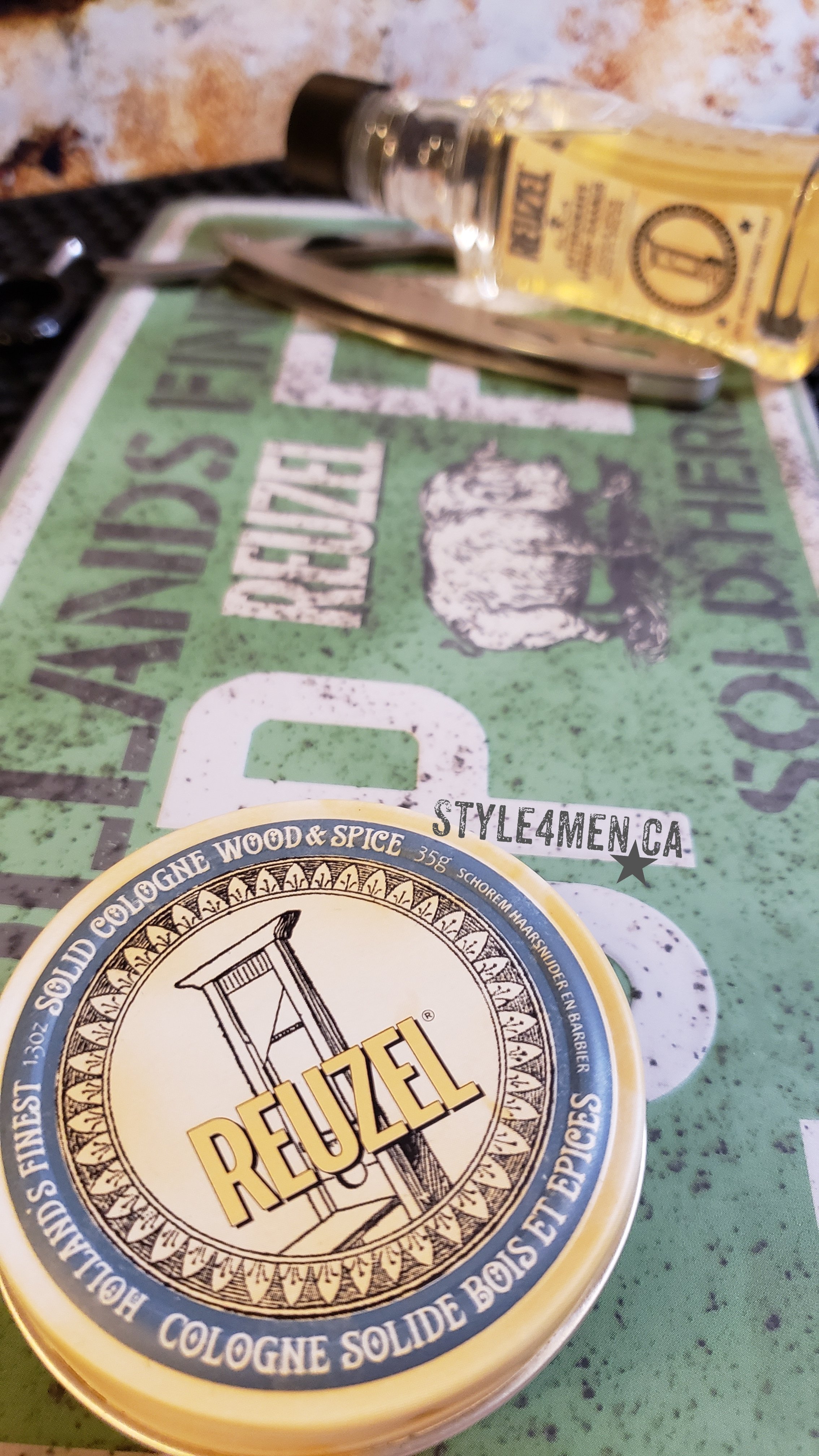 Our favorite Barbers from Holland, Bertus and Leen have recently added two products to their REUZEL product line: a matte texture powder and a solid cologne.  In this post we will focus on the solid cologne.  Stay tune for the powder review to come out shortly.

Up to now REUZEL has limited its product reach to the “Barbershop” arena.  As part of any self-respecting Barbershop there has been a long tradition of producing your own aftershave and more specifically, your distinctive fragrance for that aftershave.  Without a doubt REUZEL has accomplished that and then some. The original sandalwood inspired aftershave by REUZEL sits among my favorites.  A distinctive manly aroma that screamed “Barbershop”.  Last year there was a follow up to this traditional aftershave splash which was an astringent mousse aftershave.  This clearly showed the world that REUZEL could do traditional barbershop products, but that they could also innovate.  To my knowledge, no one else offers such an original aftershave.

More recently, REUZEL returned to its roots and expanded on their aftershave splash line by creating a new scent: WOOD & SPICE.  I have had this aftershave in my collections for a number of months but haven’t completed a proper review covering it.  My apologies!  In simple terms, it offers the same basis as their first aftershave but the fragrance is somewhat of a departure from their more distinctive roots.  This is a more subdued arrangement. 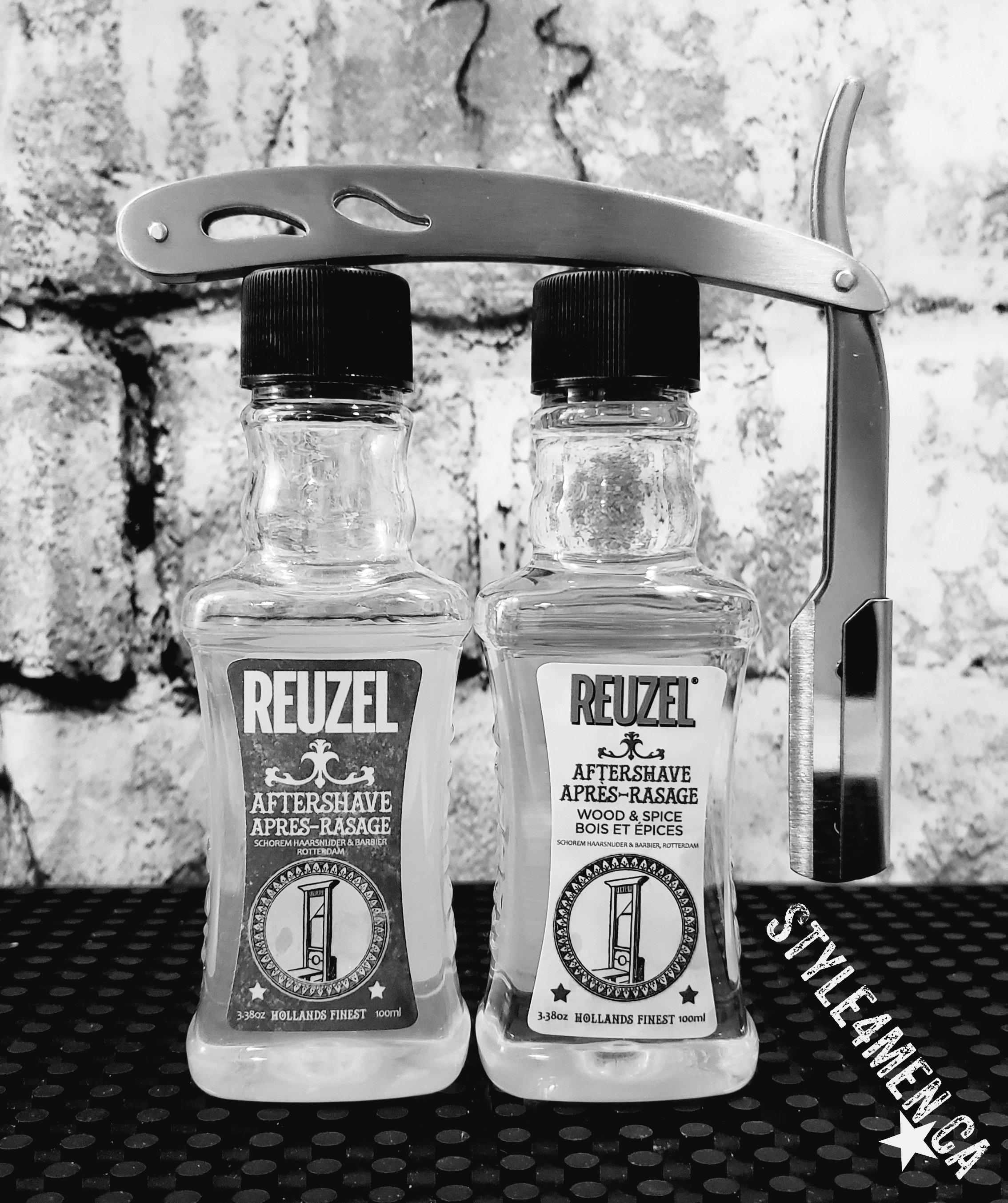 Aftershave serves a few purposes; first to clean the skin after the shave and secondly to add some fragrance to your character.  For the longest time, the only cologne most men would have known or used would have been their aftershave.  So what happens if you are sporting a beard or that you would like your fragrance to have a bit more staying power than your aftershave?  This brings us to the solid cologne!  Pull out a little jar of solid cologne and add a dab here and there.  No mess and you smell fantastic! 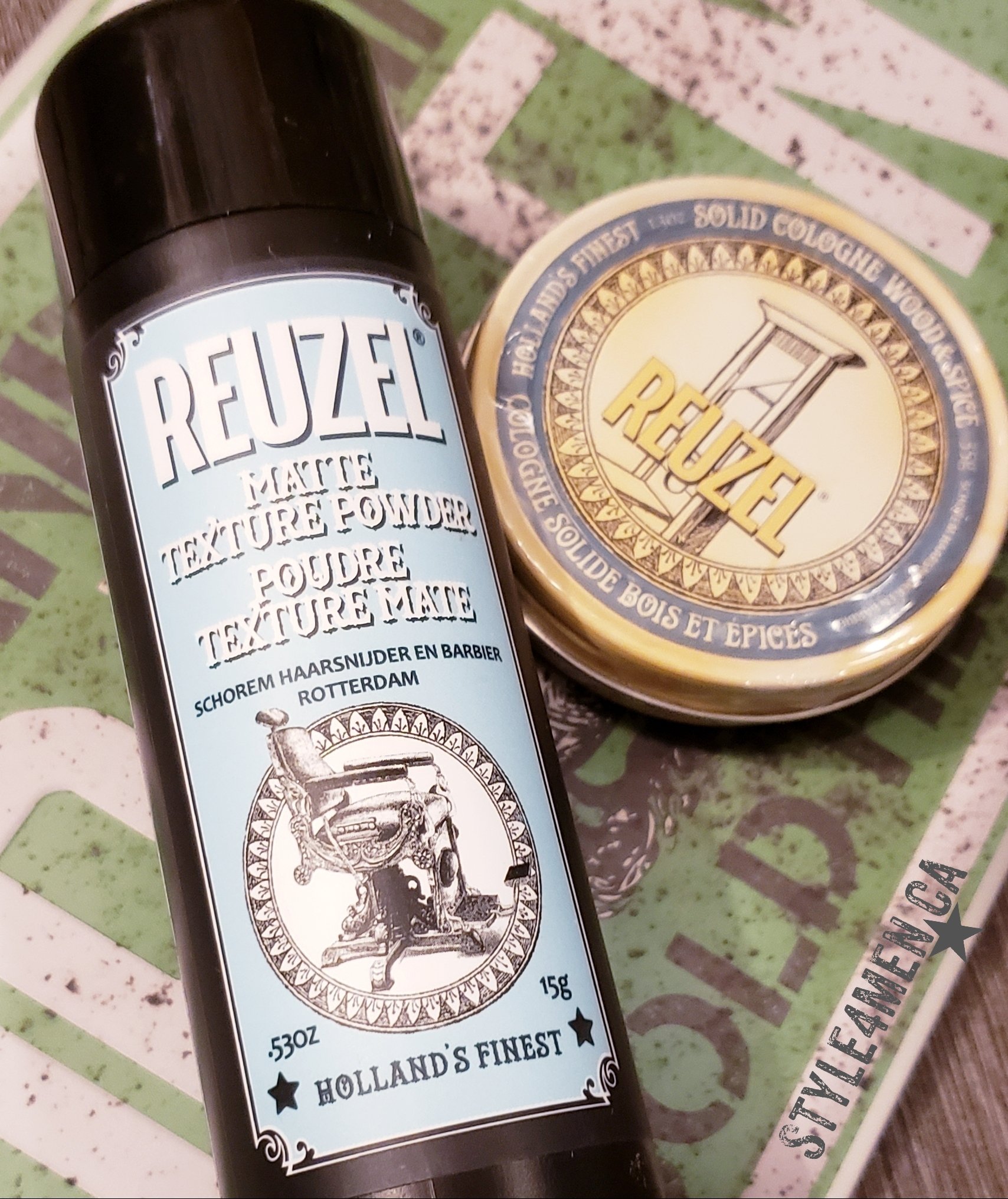 I have to assume that when the idea to launch a solid cologne came up at the Schorem shop, the biggest debate must have been over what scent to use: the established aftershave scent or the newer Wood & Spice?  As mentioned above, the W&S is a bit of a departure and is a little more subdued.  Before you give up on me and close this page, rest assured that REUZEL did not produce a puppies and rainbow fragrance and called it Wood & Spice just to lure you in.  This is a proper and manly aroma.  It might have also been more popular with the folks providing feedback.

As per the product description: Wood & spice with notes of lemon and cloves. When I first received this product, I was fighting a cold and oddly enough all I could identify was vanilla.  Now that my nose has cleared up, I detect no vanilla, but rather cedarwood, pine, spices (clove) with a distant base note of lemon. 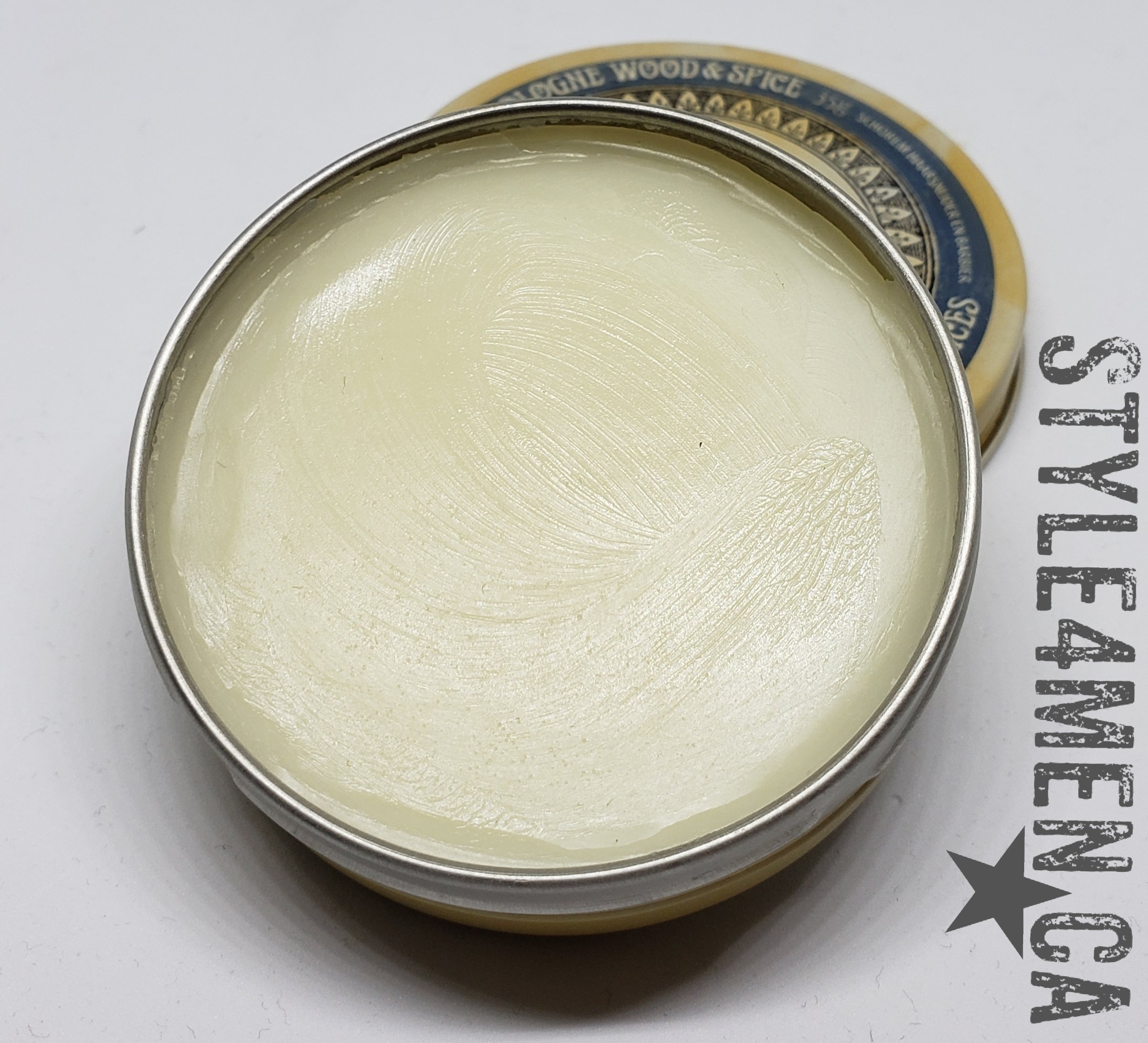 The staying power of this solid cologne was in the range of 3 to 4 hours.  It is strong enough for you to be aware of it, but it is also perfectly gauge as to not impose itself on people outside of your personal space.  To my nose, it’s a winner! I thoroughly enjoyed this scent! It is also Mrs. Style4men approved which scores extra points.

How do you use this stuff?  Super simple!  Rub your finger on the wax to collect a bit of it  and apply in your preferred zones.

Same rules as always – don’t over do it!  Max 3 swabs.  Don’t be that guy! 😉 After seeing the below chart a few years back I started simply putting cologne on my wrists and lower neck area.  This offers excellent projection! 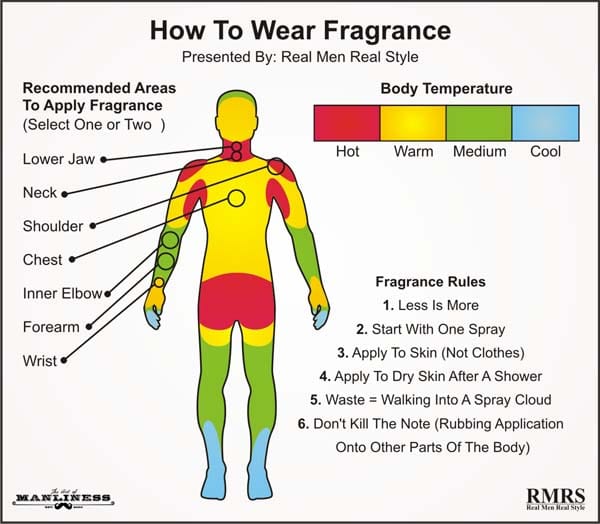 I am realizing that I haven’t even touched on the beauty of what a solid cologne is!  First off, solid colognes are not really a new thing.  It’s a fragrance delivery solution that was more or less forgotten these past decades.  Instead of putting the fragrance in an alcohol solution, it is poured into a liquid wax and oil concoction which will solidify as it cools down. The beauty here is that there is no alcohol and no legions of chemicals.  It is a very simple and nearly natural way of housing cologne. 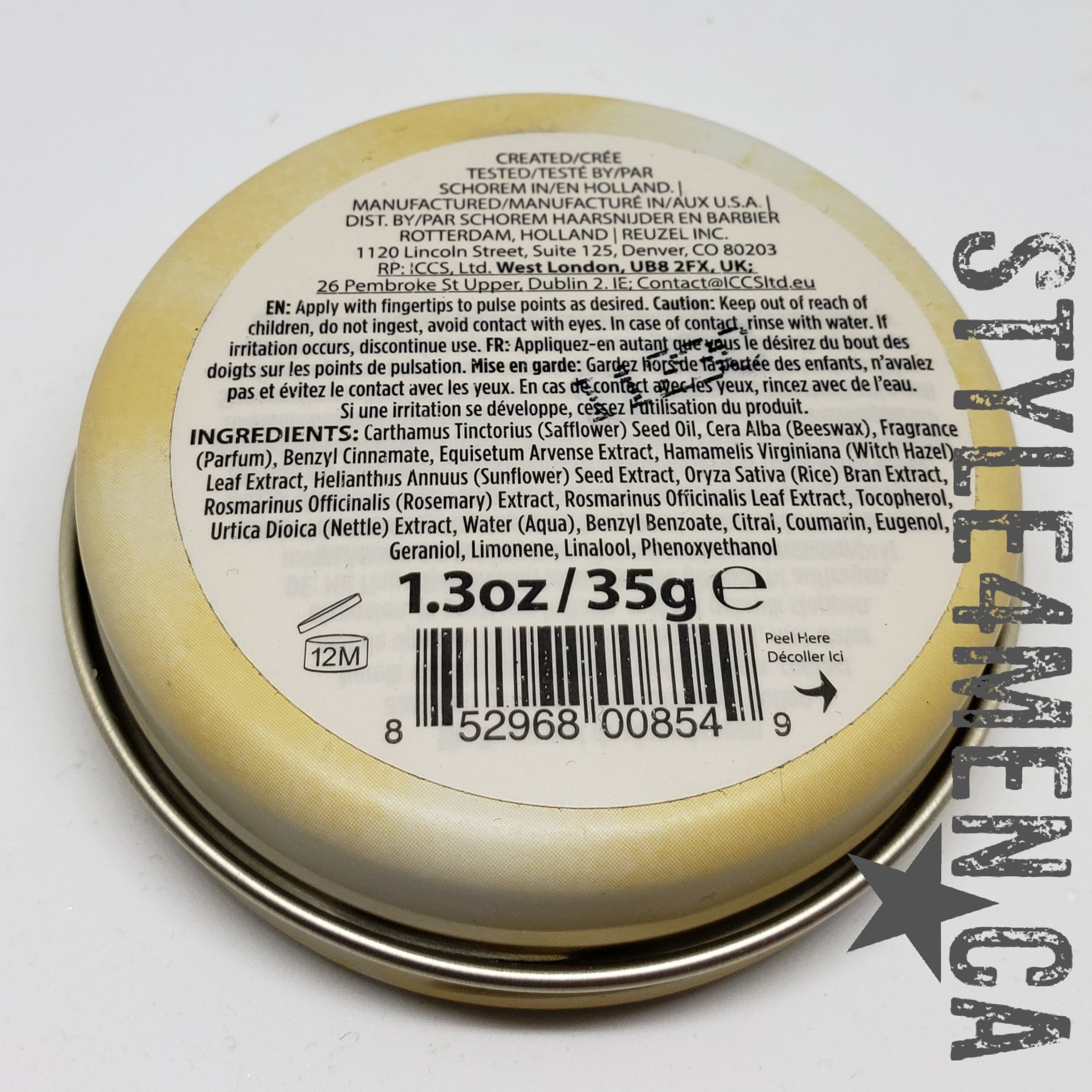 A quick google search indicates that Egyptians produced the first proper candle around 3000 BC.  We can assume that a bit after that time some wise guy (or gal) figured that it might be amusing to add a scent to that candle while it was burning.  You see where I am going with this…  Next thing you know everybody’s got a stick of scented candle that they are rubbing on themselves before leaving to go to work at the pyramids… and the world is a better place for it.

To finish up on the perks of solid colognes:

In closing, the addition of a solid cologne to the REUZEL line is a welcomed one.  You can now enjoy your favorite aftershave scent well beyond the morning shave. 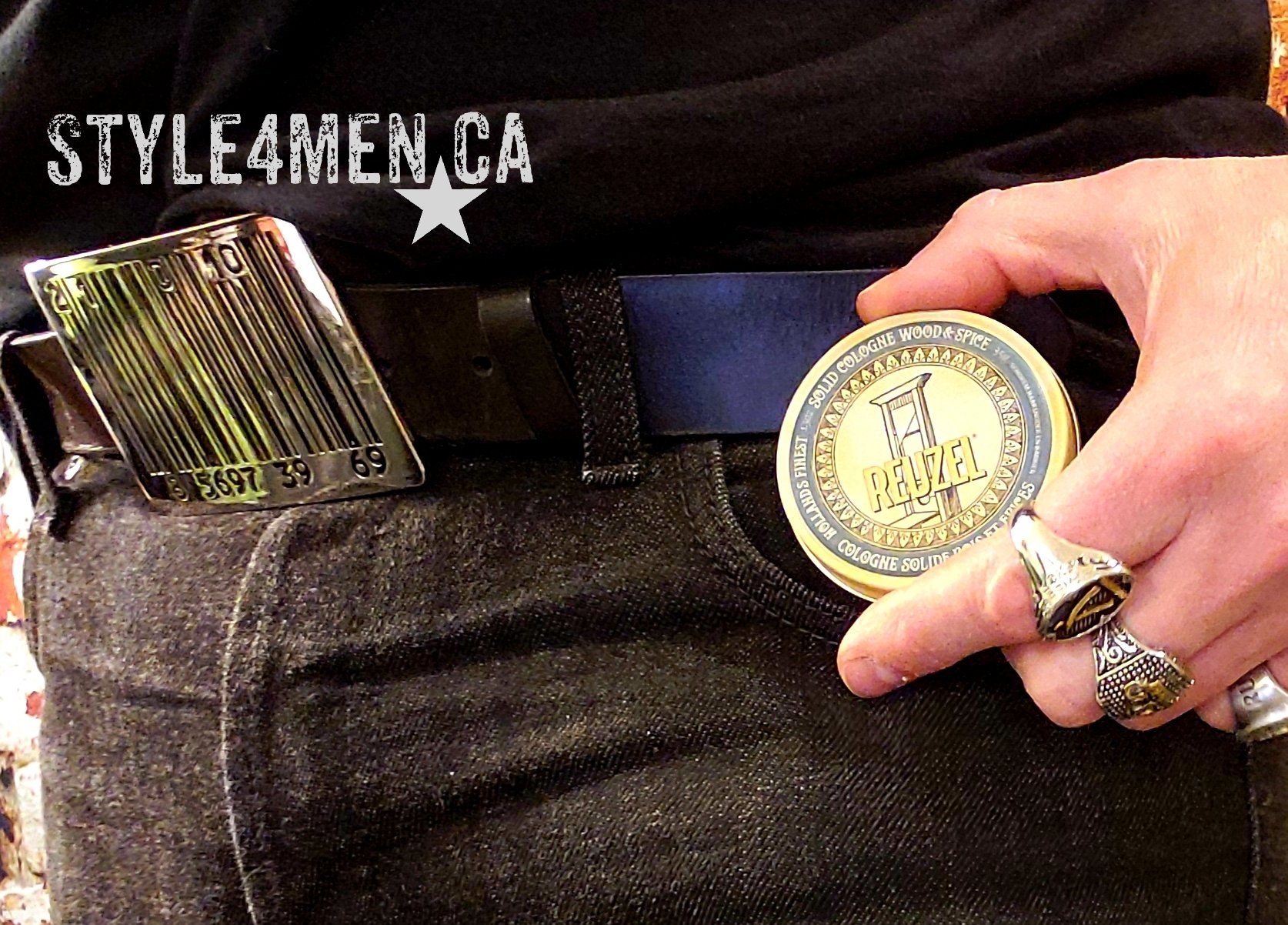